This Year's SCHEDULES Below! 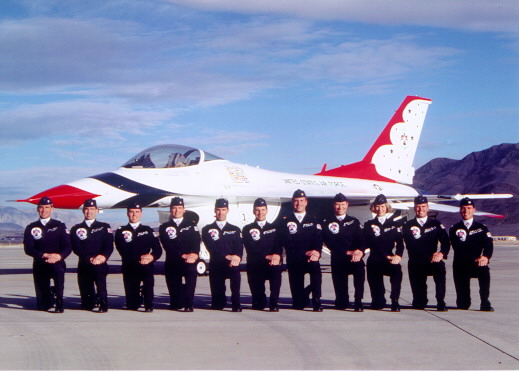 The Thunderbird squadron is an Air Combat Command unit comprised of
8 pilots, 4 support officers, 4 civilians and 130 enlisted people.  Thunderbird
air demonstrations are a mix of six aircraft, performing formation flying & solo
routines. The 4-aircraft diamond formation demonstrates the training and
precision of Air Force pilots, while the solos highlight the very maximum
capabilities of the F-16 Fighting Falcon. Some of the many maneuvers the
Thunderbirds will perform at an airshow are; Arrowhead, 8 plane outhouse,
7 ship stinger, Rhombus, Trail Formation,  Wedgie (all right: The WEDGE,
same thing!), Line Abreast, 5 Card, Immelman, Solo 8 Point Roll, The Classic
Bomb Burst (that's the new USAF Washington Memorial was designed
after), Diamond Return Crossover, Diamond Tactical Pitch-up, Gear Down
Approach, 6 ship delta, Aileron Roll, Calypso, Diamond Cloverleaf, Inverted
Pass, classic & a U.S. postage stamp Diamond Pass In Review and the very
rare Missing Man Formation.  All are on the DVD by the way.
Pilots perform approximately 30 maneuvers in a demonstration. The entire
show, including ground and air, runs about an hour and 20 minutes. However,
the aircraft are only in front of the crowd for about Fifteen Minutes total!   The
demonstration season is from March till November,   with the winter months
used for training and working in new pilots, perfecting new routines and
maneuvers. Officers serve a 2-year assignment with the squadron, while the
enlisted corps serves three to four year tours.

Thunderbird History and Legend
The Thunderbirds were officially activated May 25, 1953, as the 3600th Air Force
Demonstration Team at Luke Air Force Base, Arizona. Since the Korean War was
the first time the U.S. used jet aircraft in combat and the mission of the 3600th
was to show the American public the safety and reliability of the new jet planes
and their concomitant technology and aerial combat maneuvers of the time.

The name 'Thunderbird' was influenced  by the strong regional Indian
culture & heritage of the American southwest where the team is home based.
The Thunderbird was widely mentioned in Indian folklore from Mexico to as
far north as Alaska. Indian legend has it that both thunder and lightning were
caused by these great birds locked in mortal combat. Thus in the Indian mind
these great Red, White & Blue marked birds of prey was a 'good' deity battling
evil or light over darkness.
A more appropriate name couldn't have been applied to the man made birds of
steel soaring, diving and rolling over the earthbound habitants watching from
far below such aerial demonstrations. Sun flashing off their wings, thunder
roaring over the horizon, fire streaming from their tails and white trails etching
through a dark blue sky representative of the awesome power of the world's
mightiest nation, sworn to protect the free peoples of the world against all
enemies       -       The Triumph Of Good Over Evil.

For Videos of Teams

The USN Blue Angels are based in Pensacola Naval Air Station, Florida, and will
fly approximately 68 air shows at 37 locations in the States during the calendar
year air show season. The squadron spends the winter (January thru March) at
Naval Air Facility El Centro, California, training pilots and new crew members on
the new air show aerobatic maneuvers and routines.  Mission of the Blue Angels
is to enhance the Navy recruiting effort and to represent the naval service to the
civilian community, its elected leadership and to foreign nations. The Blue Angels
serve as positive role models and goodwill ambassadors for the U.S. Navy. A Blue
Angel flight demonstration exhibits the choreographed refinements of Navy trained
flying skills. The presentation of the graceful aerobatic maneuvers of the 4 plane
'diamond' & fast paced high performance maneuvers performed by the solo pilots
in the number five and six jets. All six jets then perform together in the well known
delta formations. Some of the names given for these maneuvers are; echelon on
parade, the sneak pass, opposing horizontal roll, a maximum performance climb,
diamond 360o turn, delta roll, line abreast, tuck over roll, tuck-away cross, diamond
flat pass, opposing minimum radius turn, fleur-de-lis burst, double Farvel, Fortus,
knife edge pass, dirty loop, tuck under break, diamond vertical break, diamond
aileron roll and missing man formation.
The Blue Angels celebrated their 50th anniversary r (1946 - 1996) in front of more
than 15 million spectators. Since 1946 the Blue Angels have performed for more
than 500 million air fans !

For Videos of Teams

When the Soviet Union launched Sputnik in October 1957, the American public was startled
and embarrassed that the communists were ahead of us in space technology. Thanks in part
for the cold war, space suddenly became a #1 priority and highly competitive. About a decade
later America was on the moon and no one else has ever succeeded nor even tried! Unknown
to most Americans at that same time, the Soviets were also ahead of us and the rest of the
world in the art of free fall parachuting, which now caused the inter-space to become a field
of competition as well.

The U.S. Army was designated to address this issue specifically and to provide leadership to
its sister services as a central resource point. In 1957, 7 soldiers from the Army's Special
Forces units received training in what was then called 'delayed fall' parachuting. This free
fall parachuting type maneuver had great military potential for inserting forces behind
enemy lines. To the Soviet Army, it was also considered a valuable propaganda weapon for
embarrassing the enemy in the field of world sports competition. On September 1959,
General Joseph Stilwell Jr, head of the Airborne Corps at Fort Brag, N.C. executed the
necessary orders forming the first official Army parachute team called STRAC with three
missions. First, research and developed new parachuting techniques and test associated
equipment. Second, compete in international and national forums for individual as well as
the team sporting events such as the Olympics and World Championships.
Third, perform aerial team demonstrations before the American public and act as goodwill
Army ambassadors before guest nations. The Army would later give the team the official
nickname  the 'Golden Knights' as it accomplished its mission above and beyond the call of
duty. Team members have given their lives in service to their country in Vietnam, Panama
and the Persian Gulf conflicts.

Team member Arrender was its first Gold medal winner in 1960. Member Fortenberry
became its first World Champion in 1964. The team now consists of both a Gold unit and a
Black Team unit with two C-31's and its first women team members have taken medals back
to the Army and America. The Golden Knights have now performed well over 7,000 aerial
demonstrations in over Forty (40) countries before millions of American audiences and have
produce no fewer than 100 national champions.

of Teams Go To EASTER EGGS
Hit the back button on your Navigator or click  HERE
to return to the SuperVideo main menu.